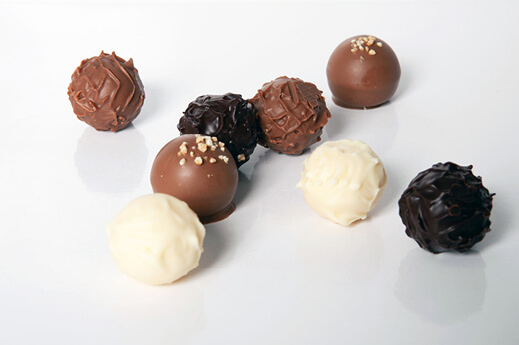 Switzerland is known for its chocolate, which Belgians for their chocolatiers. Thereby the Praline invented in France.

Belgium and Switzerland play the leading roles in chocolate

Belgium is known for its chocolatiers, Switzerland for its chocolate. Both countries have a long chocolate tradition. The Swiss Jean Neuhaus emigrated to Belgium and offered products containing cocoa in his pharmacy there, which he sometimes used to sweeten bitter pills. His grandson Jean Neuhaus first began to produce chocolates in small batches.

It hurt his wife’s heart when these delicacies in what were then paper bags were broken during transport. She invented a chocolate box in which the delicate chocolates could be transported in a break-proof manner, the basic elements of which are still in use today by good chocolatiers.

The praline comes from France – of course

Pralines were first made by the French chef César de Choiseul, for the Count of Plessis-Praslin. The chef named the sweet delicacies after his employer Praslins, from which the word praline is derived. However, Jean Neuhaus is widely known as the more famous inventor of the praline.

As a result, a number of chocolate companies were established in Belgium. They successfully lobbied King Leopold to plant cocoa beans in the then Belgian colony of Congo. This was intended to reduce dependence on South American cocoa.

Colonialism and chocolate are closely linked. The Spaniard Cortez had brought the cocoa, Mexican pepper and Tahitian vanilla from his conquests to Spain in 1528. As Belgium was part of the Kingdom of Spain at that time, the Belgians had very early access to chocolate.

Belgium took advantage of this time lead. To this day there are a number of successful chocolatiers in Belgium who dominate the market worldwide, especially in the luxury sector. Some of the best-known chocolate houses, such as Godiva, Guylian and Galler, are now owned by foreign investors whose capital has been used to successfully develop foreign markets such as China, Japan and the USA.

Godiva now belongs to the Turkish holding Yildiz (unfortunately, with this change of ownership, our favorite praline with the delicious rum marzipan filling was also cancelled), Guylian belongs to a group from South Korea and Galler is owned by the royal family of Quatar.

Chocolate for every country

The chocolate production is country-specific. The majority of Belgian chocolate producers, for example, have committed to a code that excludes fats other than those found in the cocoa bean.

The European regulation allows up to 5 percent of other (usually cheaper) fats. If you try chocolate bars in England or the United States of America, you will quickly notice that the taste is very different compared to chocolate from Belgium or Switzerland.

The world’s largest chocolate fountain is in Zurich

In September of this year, the Home of Chocolate, an experience space dedicated to the history and production of chocolate by Lindt & Sprüngli AG, opened at Schokoladenplatz 1 in Kilchberg, Zurich. One hundred million francs have been invested in the new Chocolate House, designed by renowned museum architects.

In the atrium, probably the world’s largest chocolate fountain in the shape of an egg beater was placed at a height of over 9 meters. What resembles a Jeff Koons sculpture is a reminder that the first conching machine for chocolate was invented in Switzerland in 1879 by Rudolphe Lindt from Bern. Conching – a refining process in which the chocolate is stirred along a specific temperature curve for up to 24 hours – gives the otherwise rather hard chocolate gloss and soft melting.

The fine differences between the AG and the family business

Confiserie Sprüngli is responsible for fine truffles and macarons(Luxemburgerli), while Lindt is positioned in the volume market, generating global sales of 4.1 billion Swiss francs in 2017, but upholding the image of the master chocolatier in white uniform and chef’s hat in its brand communication.

Chocolate, like many products, needs constant innovation. As indulgence purists, we nevertheless very much regret that the beautiful art nouveau café of Confiserie Sprüngli at Paradeplatz in Zurich, for decades the place of pilgrimage of GloriousMe to drink hot chocolate and enjoy the truffles du jour, now also offers quinoa salad and hamburgers. For us, just the smell of other food is incompatible with fine chocolate.

The Swiss chocolate industry attaches great importance to the protection of the Swiss chocolate brand, which may only use ready-conched chocolate or chocolate mass made entirely in Switzerland from cocoa beans, cocoa butter, sugar and, where applicable, milk. Globalization has not stopped at Swiss chocolate either. Suchard, founded by Swiss confectioner Philippe Suchard first merged into Jacob Suchard and was sold to the American company Kraft in 1990. Since the division of the Kraft company, the chocolate business has operated under the name Mondelez.

The fact that Milka and Toblerone are now brands of the American company Mondelez would hardly have been noticed by consumers if Mondelez had not decided to offer the Toblerone in England with fewer “mountain ranges” in view of the falling English pound and rising raw material prices.

This emotional topic was taken up by many newspapers as a symbol of the impending Brexit: More Valleys Than Heights. In this context, many reports pointed out that Toblerone no longer originated in Switzerland, as most chocolate lovers thought, who liked to buy the huge Toblerone bars in the duty free store as a typical Swiss souvenir whose shape reminded them of the Matterhorn.