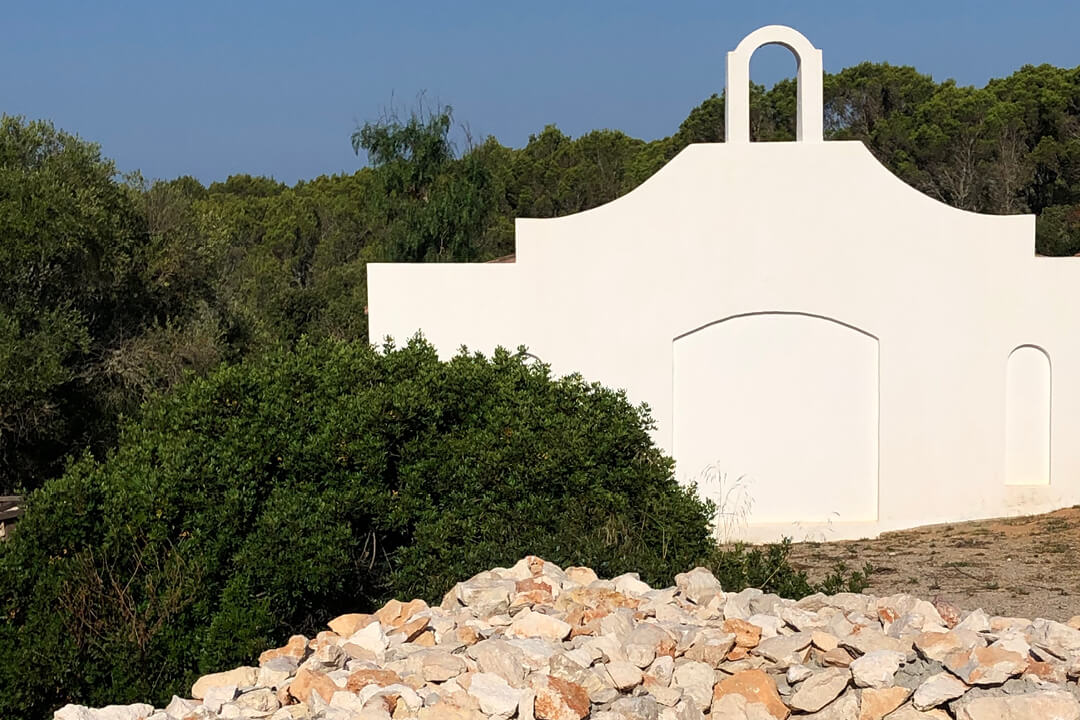 “Upside down, COVID you turn me, inside out, and round and round”

The news that Hauser & Wirth, a gallery based in Zurich, was planning to turn the former military airbase on an island in the port of Mahón into an art venue was the inspiration to plan a trip to the Balearic island of Menorca.

Then Corona came and the long-planned trip seemed impossible. Instead of extensive research into which places, beaches and restaurants on Menorca seemed particularly interesting, the next step was to wait and see when the airline and hotels would cancel the bookings.

But suddenly the situation changes. For a few “project tourists” the Balearic Islands are opened before the rest of Spain, provided that the booking was already made before the Corona crisis. The consideration of perceiving this is more of a sense of duty than of enthusiasm.

Part of my anticipation of sun, beach and sea are usually a market research of the current models of swimwear, Sunglasses and Sun hats . Nothing like that this time. Instead, attentive study of the rules and regulations of the Spanish government and the pages of the Foreign Office on the subject of Corona.

At the same time, doubling of sports activities and an even greater consumption of Lemon , Ginger and Zinc . The goal is to avoid catching a “normal” summer flu and then possibly being turned away at the airport in Spain when the temperature is measured and being expedited back home.

Since everyone says that the North Sea, the Harz Mountains and the Swabian Alb are also very beautiful, I quietly sneak out of the house to fly south. 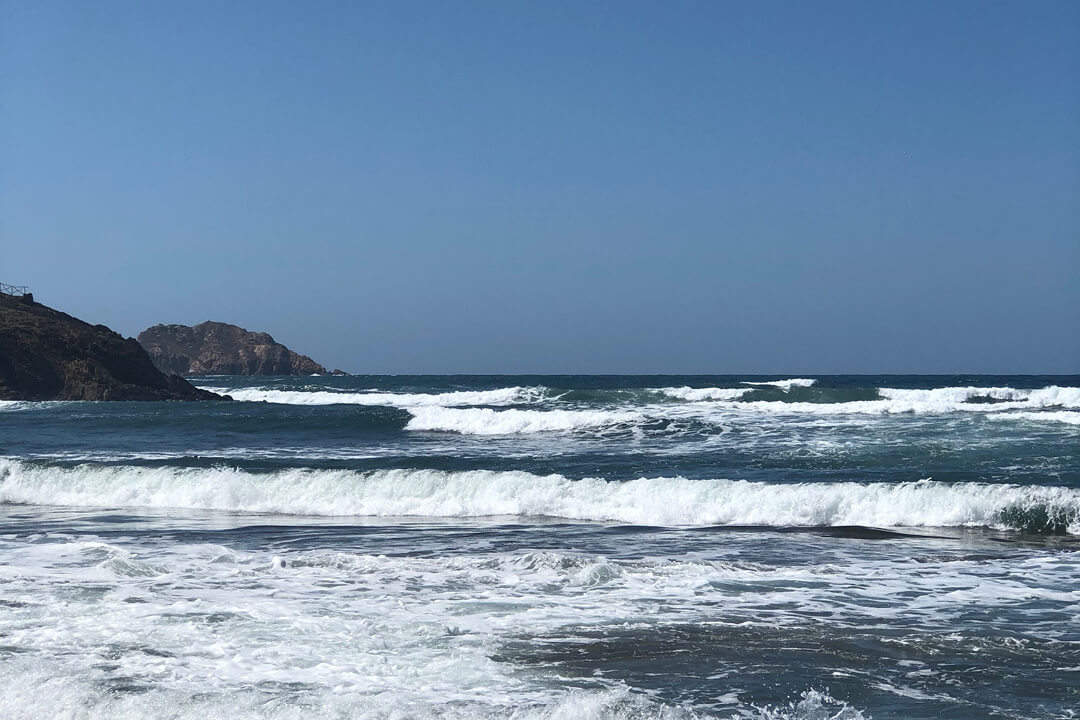 Reading about it or walking through an almost completely closed airport are two different things. The number of security guards seems to exceed the amount of passengers. They bring life to the endlessly long, lonely aisles. Invested capital in the millions, suddenly lies still and looks at you dumbly in the form of granite, steel and closed stores.

The rest of the aircraft is parked at the airfield, where it is hoped that it can be used again in the next few weeks.

The captain’s announcement “We are pleased to fly you to Menorca today” no longer sounds like a standard greeting, but as if it comes from the heart.

Tense nervousness of the entire airport staff in Spain, who do not want to do anything wrong. After each passport control, the employees disinfect their hands. One can only hope, her skin has a good natural protective layer and can regenerate after the shift. The short flight of just under two hours is exhausting – not physically, but mentally. 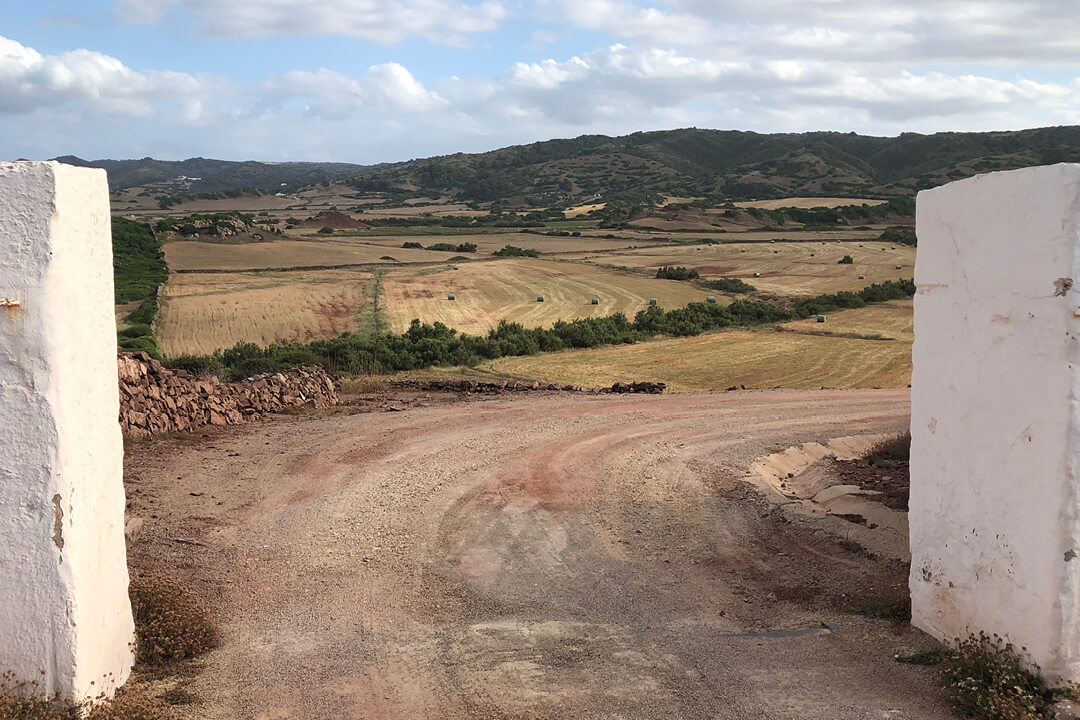 Breathe a sigh of relief

In the stylish agroturismo in the countryside we are project tourists again. The hotel had reopened the day before our arrival and for a total of three guests are practicing all the processes in the kitchen, at the pool and at the bar.

It is fortunate that the staff team consists of about 40 employees, so there is no need to worry about food being thrown away. On the contrary, the employees report enthusiastically about the flavors of the dishes they were all allowed to try.

You quickly get used to the luxury of enjoying the large infinity pool overlooking the landscape all to yourself and being able to choose the best table in the restaurant every night. No reservation requests, no booking lists, no priorities. Ultra-Wealth, with the right wealth advisor who would allow this luxury every day, undoubtedly has many benefits.

The hotel has a DJ component as part of its brand DNA. Silence the cicadas, well curated music accompanies the guest throughout the day and evening. Most of the time, both can be heard and silence is rare. So the feeling of being alone is not heard.

When more guests arrive from Paris in the second week, the excellent hotel team is happy to finally have more to do and the cocktail shakers are not only continuously polished, but also used at the bar. But the illusion is over.

While the design hotel in the countryside belongs to a successful French investor group and presumably has corresponding reserves, the situation of the elegant B&B in a townhouse in the old town of Mahón probably looks different.

Despite a high deposit at the time of booking, upon arrival the question is asked if the remaining amount for the hotel stay could be paid immediately upon check-in. Of course, without hesitation, I whip out the credit card before I could even take a look at the room. For months, not a single guest was allowed to be accommodated and many costs continued to run.

Fortunately, at the same time a large family from Barcelona decided to take a spontaneous short vacation on Menorca, otherwise it would have been very quiet here as well.

I will not forget the sad look of the young lady at the farewell, her tattoos point to extreme surfer, who served an excellent breakfast on the roof terrace every morning with her very own charm and seems to be used to struggle through life.

When the large wooden door of the house slams shut behind us for the last time, it is very quiet again in the beautiful old walls behind it.

The Prussians of Southern Europe

This is how a former consultant colleague characterized the Spaniards and exclusively hired nannies from Spain. I had always found the expression politically incorrect and degrading towards the rest of Southern Europe.

Now I have to think about it every time I walk through the Spanish port town. Exemplary discipline: Whether young or old, almost everyone wears a mouthguard when strolling through the city, although the prescribed 1.5 m distance can easily be observed everywhere and the mouthguard is thus voluntary.

The speed of people on the streets seems to have slowed down after the very long and very strict lockdown in Spain and the mood is understandably very subdued. Spontaneous laughter is heard only from children.

Involuntarily, one tries to read in the eyes. Are you yourself seen as a sign of hope that the important industry of tourism can now slowly start up again, or are you seen as a risk factor that could cause the R-factor to rise again and push the small island’s healthcare capacity to its limits?

The interpretation is difficult. The mouth guard reduces the possibility of reading other people’s faces too much, and no complaint can be heard in conversation.

Involuntarily, one dresses more modestly, reduces the number of walks through the streets and tries to signal already through one’s posture that one does not belong to the sort of tourist who enters the tobacco and magazine store in pairs, at an advanced age, with Mao Tse-tung sun caps and without a mouth guard, although only one customer is allowed in this small store. Unperturbed, and only after a long time, they leave the store, arrogantly aware that the man behind the counter would probably not dare to object. At this moment you feel infinitely ashamed of the disrespect of other tourists. 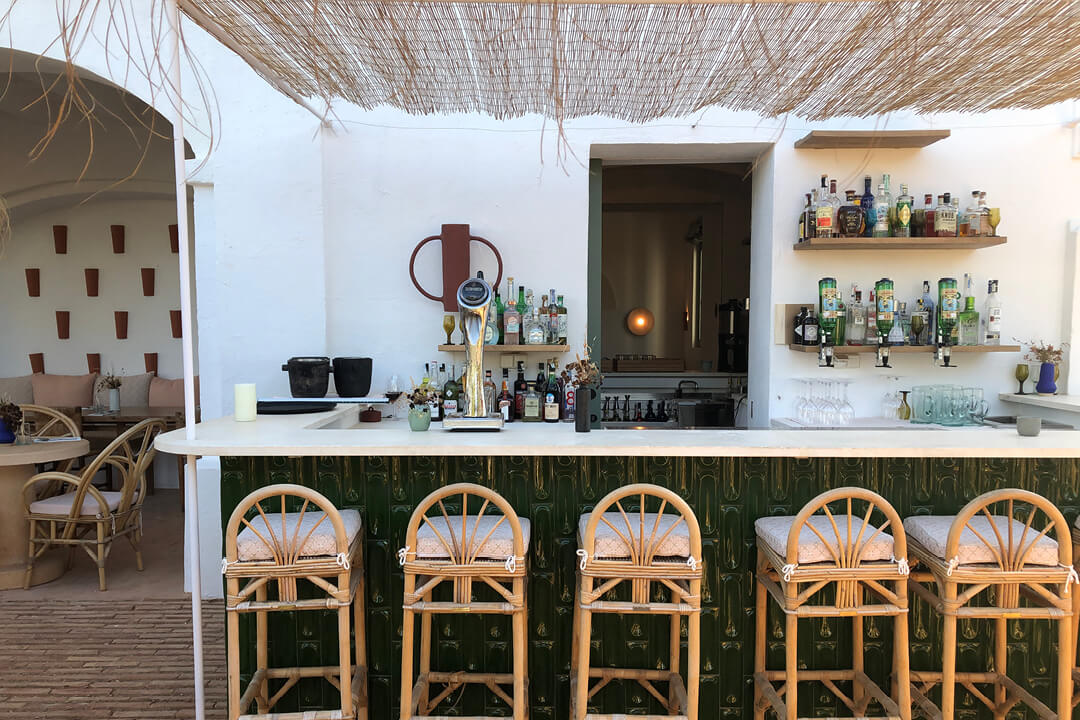 As if there were no tomorrow

For the first time, the restaurants are allowed to serve guests indoors again and disinfect masterfully and constantly. My credit card is also thoroughly disinfected. The food is excellent, and with the fear of more COVID-19 waves and the indefinite prospect of when, therefore, a vacation on the Mediterranean will be possible again, the order is constantly much too large.

As if there were no tomorrow. As if it were possible to stock up on excellent anchovies, fresh fish, sun-kissed vegetables and Menorcan suckling pig that had been braised at low temperature for 12 hours and tasted delicious. 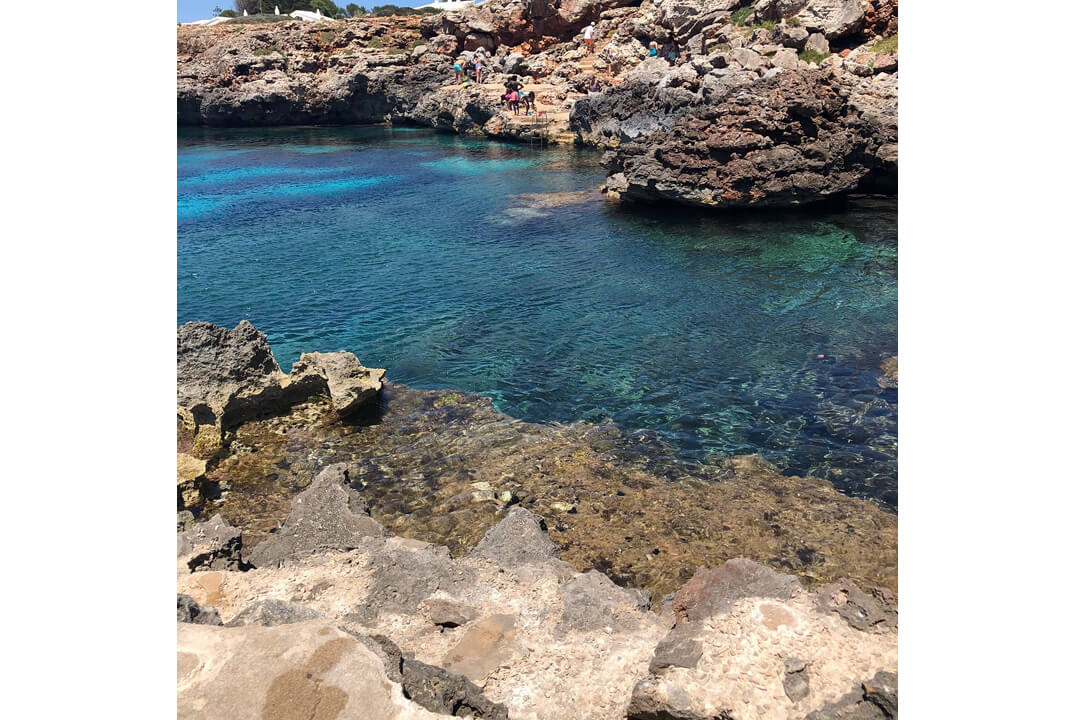 The beautiful bays and beaches are relatively empty. There you meet almost only Spaniards and some guests from France. The most important recreational effect can therefore work undisturbed: Turning off the news from your own country.

The home news portals are not clicked. No Tagesthemen and no podcast by Professor Dr. Christian Drosten. Head and soul seem to have urgently needed this rest and slowly breathe a sigh of relief.

In these times, I simply need distance from the media of my own country; only the Financial Times and the NZZ are allowed to enter the newsroom.

Both. The excellent climate with sunshine and strong wind at the same time, the clear sea water, the beaches, the stone coves, the hiking trails along the coast, the colors of the landscape, even if it sounds cliché, cannot be described otherwise than dreamlike and I am very grateful to be able to experience them.

Menorca is considered a quiet natural beauty, compared to the much more famous Balearic islands of Ibiza and Mallorca. Very restrictive building laws have meant that there are only a few large hotel complexes. The topography of the relatively small island with few freshwater resources has shaped the slow and rather small-scale development of tourism. 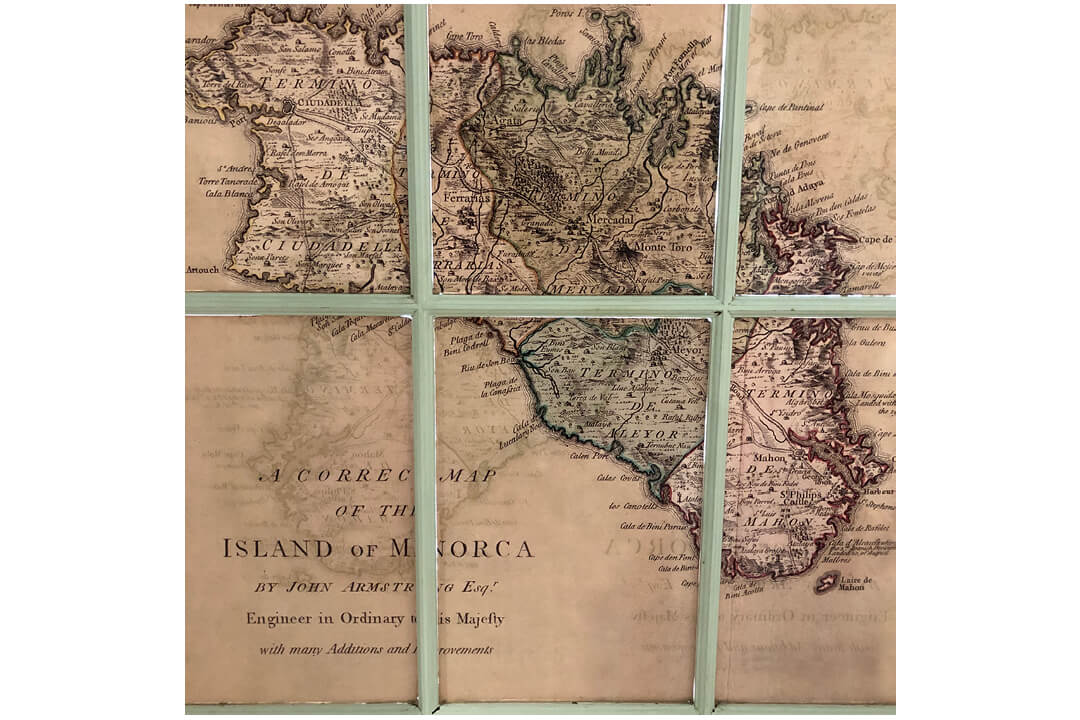 The elongated natural harbor of Mahón was fiercely contested in earlier decades, as it could accommodate large fleets, making it a strategic base for trade in the Mediterranean. Huge fortresses at the bridgeheads, the large gin distillery in the port of Mahón, and the fondness for pomada (a Gin&Tonic variety) still bear witness to the fact that Menorca belonged to Great Britain for many years.

Otherwise, there are only very small to tiny ports on Menorca. Mallorca, on the other hand, was visited by 791 cruise ships in 2019 and still had 58.28 million hotel nights in 2019.

Even in these extremely quiet days on Menorca, the small parking lots of some beaches are already filled in the late morning and have to be closed so that no other car goes in vain on the dusty stone roads that lead there.

Even in these almost tourist-free days, there are some to pick up smaller pieces of plastic on the beach. So you look up at the sky and don’t know whether to be happy about the planes that are now increasingly visible there again.

Meanwhile, the Financial Times reports of completely littered beaches in Brighton and Margate after beach visits were allowed again for the first time after the lockdown. 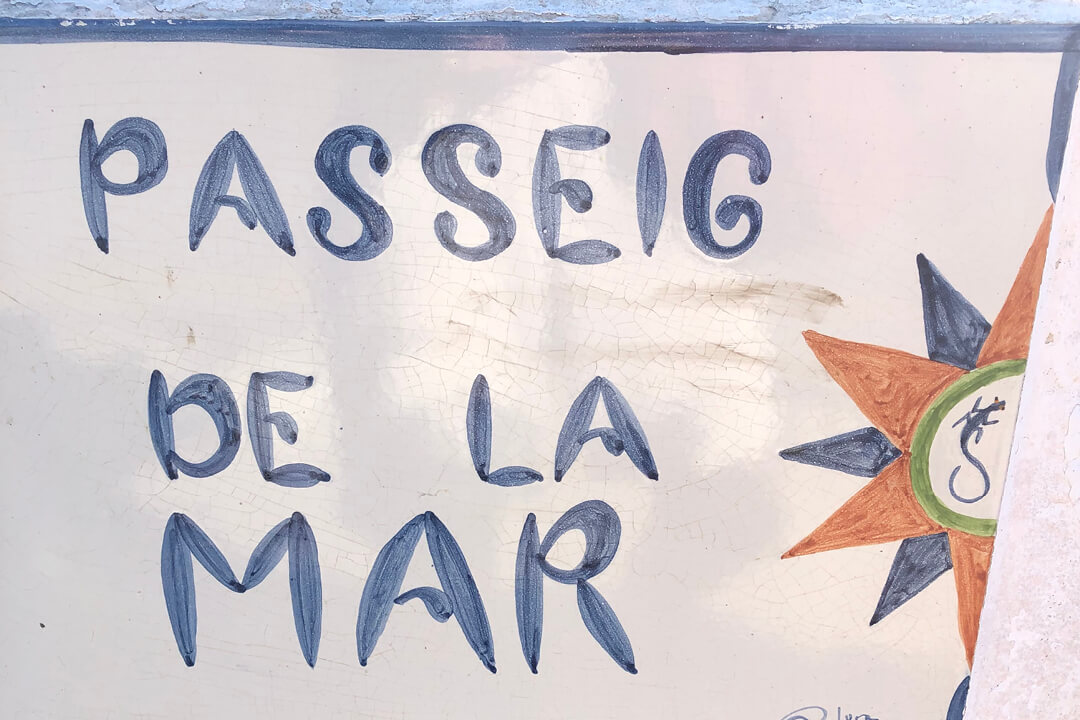 The discipline of the people of Menorca is enormous. In every respect. The bravely maintained facade only collapses when the emotions can no longer be contained. The chef, who is infinitely happy to be able to cook for his guests again, bursts into tears as he says goodbye, forgetting that a handshake is still forbidden. The waiter, who does not simply shake off a (justified) complaint but is distressed, also spontaneously extends his hand as a gesture of reconciliation.

The vast majority fill their profession in gastronomy, museums and hotels with a great seriousness, conviction and quality that you have to look for a very long time and rarely find in other places. They all wish for an end to short-time work, the chance to generate revenue again and the possibility to service loans again.

But if it’s already difficult on a very manageable quality scale, how can it work on a larger scale without destroying what I myself love to travel for?

The passenger in the row behind me can’t be ignored. He indignantly reports that the other members of his hiking group did not tip a dime during the rest stop at the pub. “Why, everything is included, isn’t it?”.