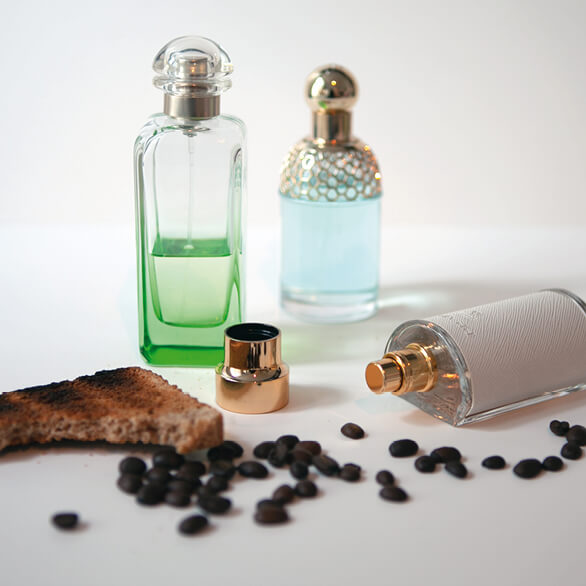 Our sense of smell decides who we like and love. When it smells like freshly baked bread, we immediately feel safe. In a bottle Perfume is a whole world. These days with special significance for our own little private world.

GloriousMe placed a small online order for face masks and a large order for perfume on the day the first Corona shutdown was announced.

The fragrance we love, we do not want to miss, especially when much else is not possible. A small piece of elegance and familiarity, an emotional shield for the home office and stay in any place where face masks are mandatory.

Cosmetic companies such as Le Labo, Grasse – New York, develop individual fragrances for hotels. The memory of beautiful days and the fragrance in the rooms of the Pulitzer Hotel in Amsterdam, can be olfactorically recalled at home with the hotel fragrance.

The smell of slightly burnt toast immediately transports GloriousMe to London in her mind. There, the slightly sweet scent of roasted aromas is present in almost every stairwell in the morning.

The scent of men and women

Al Pacino in his role as Lieutenant Colonel Frank Slade, who is blind as a result of an injury sustained in military service, when passing a woman manages to name by her scent the soap that these women used in the morning.

What Al Pacino was able to recognize in the film “The Scent of Women”, only a few succeed in doing. A perfume smells slightly different on every person’s skin. Controlled by evolutionary genetics, we like the smell of people to whom we are attracted and vice versa.

Many remain loyal to their aftershave or perfume for many decades – which is nothing to object to. Perfume classics such as Aqua di Genova have lost none of their appeal since Stefano Frecceri composed the perfume for the Royal House of Savoy in 1853.

With a new perfume, we like to stick with the tried and true

Interestingly, even when choosing a new perfume, we usually move within a certain fragrance spectrum. The odd fragrance component is added, but the basic components of the scents we prefer remain relatively constant.

An experienced salesperson, faced with the question “I’d like to try something new” will first ask what perfumes you have preferred in the past.

From this, with the appropriate knowledge of the composition of these perfumes, a new proposal can be developed, which is very likely to please.

Of course, this is relatively easy to calculate with algorithms online as well – it just requires answering some questions. However, the in-store experience is still important when choosing a new fragrance.

As a result, the retail sector has been hit hard by Corona-induced closures and reductions in the shopping experience (cue shopping exfearience, the anxiety and stress associated with physical shopping instead of a pleasant positive experience), even when it comes to perfume.

The formula for success of a perfume

Each perfume is based on a formula, usually patented, which describes the exact composition of the individual components that make up the perfume. Almost all perfumes consist of a mixture of alcohol, essential oils, mostly of plant origin, and synthetically produced fragrances.

A distinction is made between top note, heart note and base note. One of GloriousMe’s favorite perfumes is Portrait of a Lady by Dominique Ropion from Editions de Parfums by Frédéric Malle. The notes of the perfume contain:

The proportions of the components and the question of which components in the perfume mix consist of synthetic fragrance molecules and which of natural ingredients remains the secret of the perfumer and the chemist who defined the formula.

Since the extraction of most essential oils is very costly and subject to the usual risks of agriculture and global supply chains, price is some indicator, though not sufficient proof, of the proportion of natural ingredients.

A perfume made exclusively from natural ingredients has an immensely high price. For example, it takes 50 kilograms of sandalwood to make 1 kilogram of sandalwood essential oil.

To obtain the deep dark wood inside the sandalwood tree in sufficient volume, the tree must have grown for at least 30 years. The 50 hours for oil distillation hardly matter anymore.

In India, once one of the main suppliers of sandalwood, sandalwood trees are now among the endangered tree species.

Even Coco Chanel had to save

Even in the development of the world’s best-known perfume, Chanel N° 5, savings had to be made, according to the company’s history. The basic composition was first developed by perfumer Ernest Beaux as Bouquet de Catherine for the Russian Tsarina Catherine the Great.

When the perfume concept was later presented to Coco Chanel, the proportion of real rose essence already had to be reduced, otherwise the originally developed perfume would have become too expensive even for the luxury market.

The revision of perfume formulas over time is not uncommon. Tastes change and so does the cost of raw materials. Legislation plays an equally important role.

Due to their high allergy risk, the proportions of natural oils extracted from cloves, roses and lavender have already been severely limited under EU legislation.

Currently, there is a recommendation on the EU level that provides for far more radical reductions of natural components and could result in a redefinition of many perfume classics.

The perfume market offers every nuance: the loud tones, which stand out powerfully in the room and remain there for a while, even if the wearer has long since left the room or the jogging path, and the fine perfume compositions, which appear rather quietly.

A good perfume, even a light, fresh fragrance dominated by citrus notes, for example, has depth and complexity. A noble perfume, even if heavier fragrances are deliberately chosen because the perfume is specifically intended for the evening, never seems intrusive.

One hour for the right decision

SOFT SHINE ON THE FACE

The salesman in the London store of Santa Maria della Novella was knowledgeable and determined. I had chosen a perfume. He refused to sell me the perfume and advised me to first leave the store for an hour with the favorite and second favorite fragrance and ideally go for a walk.

Since I thought I was safe and actually wanted to continue directly to a museum at the other end of town, I reluctantly followed him. He was right.

After an hour, the number 2 had clearly moved into the favorite position and I left the store with the perfume that I loved from then on.

When trying a new perfume, one first perceives mainly the top note. Therefore, you should take at least an hour before making a final decision, because only after a while you manage to perceive heart and base notes.

Since it is very difficult to distinguish too many fragrance compositions, the preselection of the perfume is important. The narrower selection is best smelled on a strip of paper and only the two favorites should be left to spray on the wrist, where the pulse can be felt. After that, walk for an hour in the fresh air or in a place that is not strongly dominated by fragrances, it is worthwhile to choose the right perfume.

Morning is a good time to choose a new fragrance. Our sense of smell is strongly dependent on our respective overall constitution.

Some days it just doesn’t work out, in which case it’s better to stick with the previous favorite or choose another day to discover a new favorite scent.

On the pulse of the wrists, behind the earlobes, at the hairline or décolleté – all good places to apply perfume. However, there are two different schools here.

While one school strictly considers two strong spritzes to be the maximum, there is another equally strict school that considers spray bottles to be the devil’s work. We met her in Naples.

There we were advised to drizzle the perfume into the palms of our hands, rub our hands together, and then run our hands over the shoulders of the suit with quick strokes. Tailor-made in Naples, of course. Try out what suits you more.

On the other hand, there is agreement on where to store perfume. Not in the bathroom and possibly still with direct sunlight on the perfume’s bottle, but in a dark place with rather more even, cooler temperatures, for example in the bedroom closet.

Applause for the perfumer

A short briefing is enough for a fragrance specialist to mix an individual fragrance in the laboratory from a wide variety of fragrance molecules of synthetic and natural nature and to give it a name such as Berlin or Max Mustermann.

However, just like top musicians, there are outstanding perfumers who, with experience and skill, develop perfumes that inspire all over the world and for many years to come. If you look at the names behind the top perfumes of the big, traditional perfume houses, you will always come across a few, few names.

GloriousMe appreciates their abilities and would not start the day without perfume. A small luxury in the current world, which we also understand as applause for these experts in their field.

And in case you’re wondering what scent is enveloping GloriousMe right now: Club Water by Wiener Blut. The perfume contains: Neroli, angelica root, frankincense, banana leaf, galbanum resin, nettle, ivy, smoked wood, gurjum and wild pistachio. Who could resist with this mixture? Discovered in an English magazine, tried in a perfumery in Zurich and just reordered in Vienna. And what is your favorite perfume?