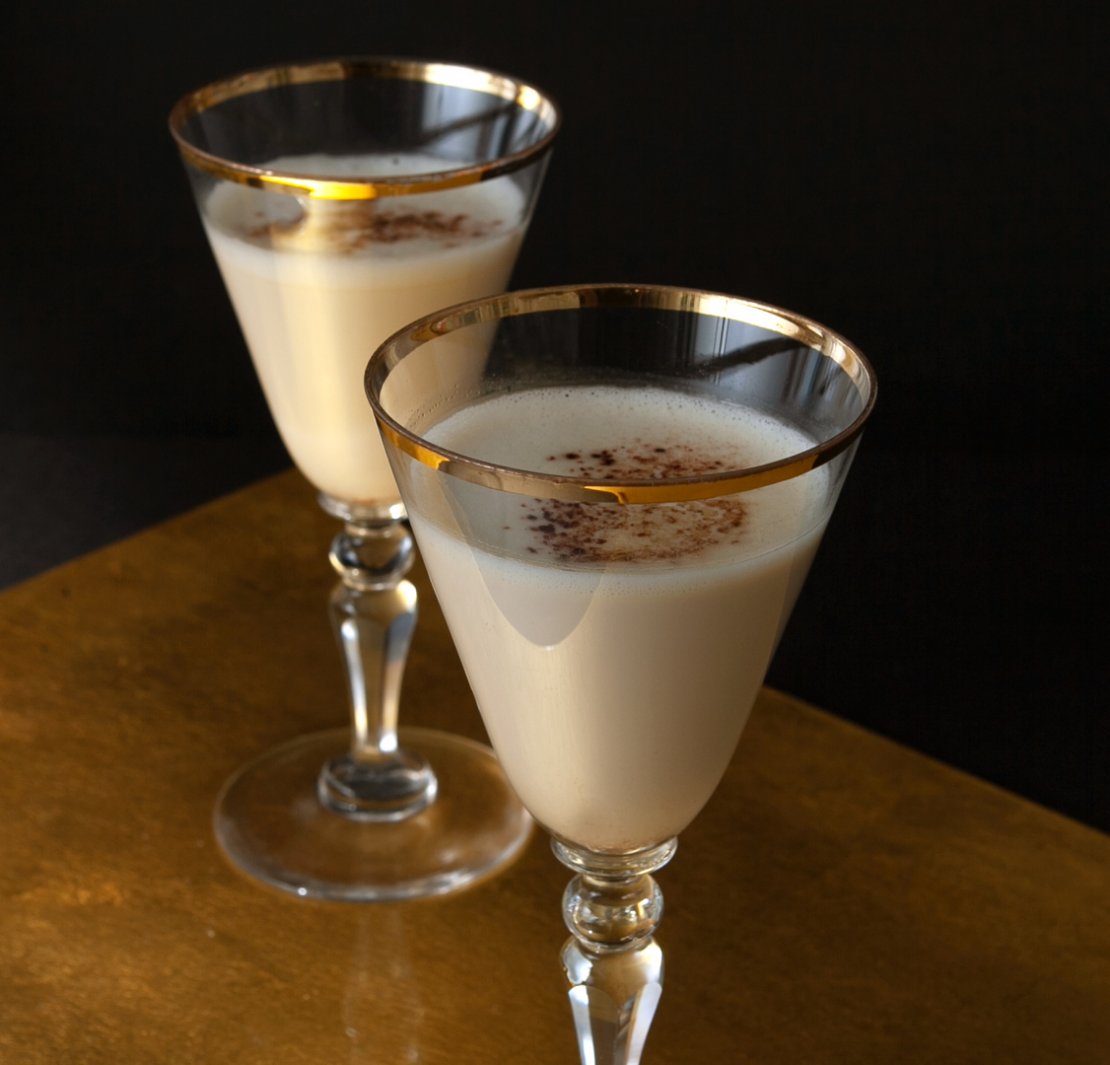 COCOA FOR ADULTS WITHOUT TAX BILL

Stylish drink for the bar at home

Even if only the bar at home is open, you can enjoy a stylish drink. We recommend a Brandy Alexander, which experienced bartenders also like to recommend as a Night Cap.

A Night Cap is supposed to help you fall asleep easier as the last drink before bed. Do not worry, we will not be unfaithful to our preference for healthy lifestyle, which would provide for this a cup of herbal tea . Alcohol is not the best idea for restful sleep. Small amounts of alcohol help to find sleep more easily, but the deep sleep phase does not proceed optimally with alcohol in the blood .

But – we live in extraordinary times, when a little glamour at home is good.

Just the sight of Brandy Alexander in a stylish cocktail glass puts you in a good mood. In all likelihood, you already have most of the ingredients for this on hand at home:

The preparation is very simple:

Add the cognac, créme de cacao, cream and finally the ice cubes to a cocktail shaker, mix briefly and strain into a cocktail glass. Grate a little nutmeg over the top. If you like, you can also add a small pinch of sea salt .

With Créme de Cacao you put now possibly the forehead in folds and remember that you disposed a bottle of it with the last removal, because they felt the contents as too sweet.

As always in life, there are subtle differences

Créme de Cacao liqueur, is in fact usually added with plenty of sugar. Joerg Meyer, the Hamburg bar owner and mixologist who became known as the inventor of the Gin Basil Smash, has therefore with the Dutch company De Kuypter from Rotterdam has developed the Dutch Caco. Dutch Cacao gets by with a much lower sugar content.

If you like it even more purist, use the distillate “No 385 Panamanian Cocoa” of the sympathetic German Spirits Manufactory from Berlin. True to the spirit of this distillery, the works without sugar, colorants and flavorings in all distillates, unless a liqueur is to be created, in which the basic ingredient sugar cannot be missing, there is a distillate here, that is made from roasted cocoa beans. The basis is the variety Porcelana of high quality cocoa Criolo, a variety of cocoa used for the production of fine chocolates.

The quality control of the cocoa beans and the roasting is crucial for the taste of the cocoa. This is one reason why chocolatiers such as our esteemed  Pierre Marcolini and Deutsche Spirituosen Manufaktur do the roasting of the cocoa beans themselves. Cocoa beans of such quality produce a very complex aroma picture of fruity, nutty and herbal notes. So you get unadulterated cocoa flavor without any artificial flavors.

With this choice you do not do anything wrong, because this interesting spirit finds with your guests also purely in the glass as digestif surely pleased buyers.

Quasi from the pharmacy

At the Berlin address, the distillates are bottled in a trendy retro apothecary bottle. Distillates were first distilled in monasteries, the precursors of pharmacies. Experimenting monks in France are said to have started distilling cocoa beans in the 16th century.

Our recommendation: If you have not thrown away the bottle of Créme de Cacao, which may have been stored in the cellar or bar for a long time, after all, just start with it.  If you have a taste for it and want to test your way to a more sugar-reduced version, there is certainly a retailer for exceptional spirits in your town, or the online store makes it possible.

In the best company

With a dusty bottle of Créme de Cacao, you’re in good company, because the Brandy Alexander has experienced a renaissance only in recent years. The predecessor of the Brandy Alexander was the Alexander, which was mixed with gin instead of cognac or brandy. Cream, sugar and cocoa flavor were in times when not every gin deserved an award, quite intended to cover the taste of gin.

In 1934, a year after Prohibition in the United States, the then newly founded men’s magazine Esquire put Alexander on its list of the twelve worst drinks of the decade. The days of Prohibition are long gone. Likewise, the times when the Brandy Alexander was preferably a drink for ladies who had little experience with cocktails.

Much like the Martini cocktail, which has become one of the most famous cocktails thanks to James Bond, the Brandy Alexander has several movie mentions.

In “Days of Wines and Roses” Jack Lemmon, an advertising expert in the film, suggests to his beloved, Lee Remick, who does not drink alcohol, but likes chocolate, to try a Brandy Alexander. The two become a couple. Jack Lemmon’s professional success brings more and more pressure and an ever-increasing alcohol consumption of the couple, which ends in alcoholism. The film, a major milestone in Jack Lemmon’s film career, is told in retrospect at an Alcoholics Anonymous meeting.

While in “Days of Wines and Roses” (1962) the Brandy Alexander is the entry into a disaster, in the film “Two Lovers” the Brandy Alexander is used as a stylistic device to show two different worlds. Gwyneth Paltrow asks her friend and Coney Island neighbor, Joaquin Phoenix, to accompany her to a dinner with her lover, a partner in a law firm, at a hip restaurant in Manhattan.

Joaquin Phoenix is visibly uncomfortable in the unfamiliar surroundings of the restaurant and orders a Brandy Alexander, which Gwyneth Paltrow told him they always liked to drink there. The waiter serves the Brandy Alexander and Joaquin Phoenix nervously mistakes the whisk of the drink for a straw, which the waiter immediately notices and offers to bring him a straw. But the wonderfully acted scene is only one reason to see this little cinematic masterpiece.

After another suicide attempt, Joaquin Phoenix meets the handsome, sensitive daughter of business friends of his parents and everyone hopes that the two will become a couple. Shortly after, he falls in love with the glamorous Gwyneth Paltrow.

REDISCOVER THE FLAVORS OF PEPPER

The atmospherically dense film offers, in addition to many excellent actors, such as Isabella Rossellini and of course Joaquin Phoenix, who plays in a class of his own, a coherent portrayal of Joaquin Phoenix’s Jewish family in many details without ever slipping into a cliché. “Two Lovers” (2008) is neither Hollywood nor arthouse movie. It finds the fine balance in between, also offers a melancholic reunion with New York and is the ideal film for a nice movie night at home.

To avoid a hangover the next day, after a meal accompanied by wine, avoid a cereal-based digestif . Therefore, the Brandy Alexander is often recommended by experienced bartenders as a Night Cap. One more reason to give the Brandy Alexander a chance. We really like it because the cream and cocoa flavor combined with the cognac make it a nice drink on cooler days or days when you just want an adult cocoa.

You have tried the Brandy Alexander and it will not become your favorite drink, because you love cream on the cake, but not in the drink? No problem. So that your bottle of Créme de Cacao doesn’t gather dust and fly out the next time you move or radically tidy up, we’ve got another cocktail recipe for you, developed by William J. Darling for the Café Royal in London:

Lemon twist of a natural lemon

Put all ingredients with ice cubes in the cocktail shaker, mix briefly and strain into a nice glass. Done. The lemon juice makes this cocktail go in a fresh direction. Lillet you still have in the cupboard, since you have read our description of the White Negroni found so good and gin is nowadays yes already part of the basic equipment of every household in quarantine.